Honor for 30 years of service

Holger Illgen was honored for 30 years of service at

Operation manager Martin Pricker thanked the jubilee for his many years of loyalty
and presented him with the certificate of honor from PERKUTE Maschinenbau GmbH.

Holger Illgen started at the age of 20 on May 4th, 1992 as a skilled electrical worker/maintenance
at PERKUTE Maschinenbau GmbH.

According to the Moth: “One waits for time to change. The other tackles them vigorously and acts"
(quote from Dante Alighieri) he has always kept a cool head and supported the company even
in times of crisis. He has become an indispensable part of the team.

In addition to several measures for professional development, he is currently in his second term
of office as Chairman of the Works Council. He always has an open ear for colleagues
and supports them with his expertise and his friendly and open manner whenever necessary.

Mr. Pricker congratulated Holger Illgen and wished him many more years of cooperation. 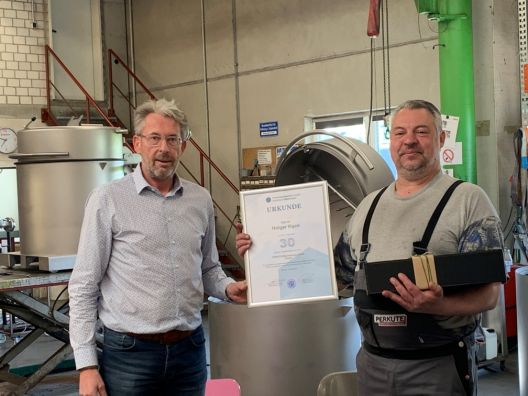