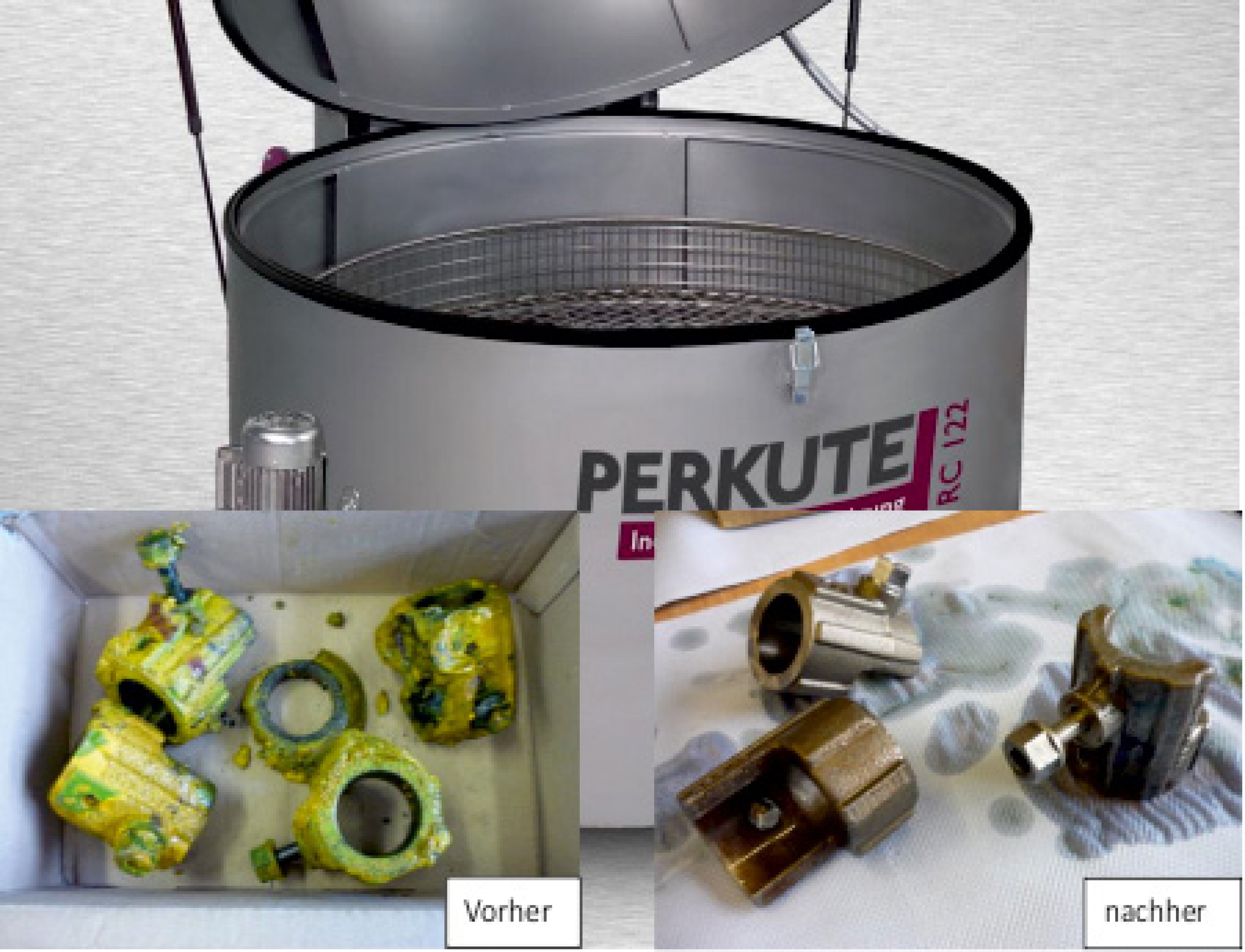 The paint stripping machine works, as shown by the picture, with a highly efficient spray process, is designed for mobile deployment and is space saving.

"Perkute - and the paint is gone", is a brand new "claim" by the Rheine based company. Whereas the Perkute Maschinenbau GmbH was previously mainly known for their machines and systems for industrial parts cleaning in many sectors of the manufacturing industry and the maintenance sector, "numerous customer inquiries brought about that we now also added a paint stripping machine in our program" explains Martin Pricker during a visit of the company headquarters of MM MaschinenMarkt in Rheine. With regard to its structural design, the new paint stripping machine is based on a tried and proven set of parts cleaning systems by Perkute - specifically the Toploader Series of the manufacturer, which due to specially adapted equipment components can now be used for paint stripping. "Thus, no costly new construction but only an adjustment was necessary", emphasizes Pricker. The machines work like its "part cleaning machine sisters" using Perkutes typical spray process. They can be used mobile anywhere and additionally they are space saving. The close cooperation with the paint manufacturer allows highest process reliability in the application, since every customer color and every customer paint is analyzed in advance. Pricker: "With mobile paint stripping machines and organic bio paint strippers in the spray process, Perkute offers an attractive alternative to conventional solvent or blasting methods." The company can now look back on nearly five decades of experience in the field of industrial parts cleaning. In 1967, Perkute started developing and producing metal cleaning machines and degreasing machines in the Sandkampstraße in Rheine. In 1996, Perkute was incorporated into the Stenhøj Group based in Denmark, which operates worldwide and inter alia produces lifts, compressors, hydraulic presses and broaching machines. The establishment of the new office and production building in the Düsterbergstraße in June 2001 laid the foundation for a continued positive development of Perkute. In 2005, a new development came on the market, the Clean-o-mat PF.
Thanks to extremely robust components in combination with an optimized standard configuration, this system sets new standards in the cleaning technology. The solid design of the individual components combined with the modern design of the easy to clean system housing made of stainless steel is to date a hallmark of the innovative approach of this series. Following the DIN-ISO 9001 certification, in the years 2010 to 2012 Perkute ignited literally a firework of innovation: with the Toploader machine Clean-o-mat SPF (trolley) that optimally solves the loading and unloading of heavy and voluminous components, with the basket-washing system Clean-o-mat Sylt for gentle cleaning of bulk goods, turned and milled parts as well as geometrically complex components and with the conveying system Clean-o-mat TW. It is custom designed and inter alia is suitable for the cleaning of bulk parts, long materials, boxes, containers or pallets. According to the manufacturer all single and multi chamber spray cleaning systems by Perkute work water based and are thus economic as well as environment friendly.