The automatic part-cleaning becomes more important in small-series production and in the building of prototypes as this increases production safety in further processing, economically.
Salzgitter Automotive Engineering has acquired a machine for this reason.
Do you have any further questions?
Ask us like to hear your questions about our products, our services and our company in general. We appreciate your interest in Perkute.
+49 (0) 59 71 / 8 08 16-80 info@perkute.de contact form 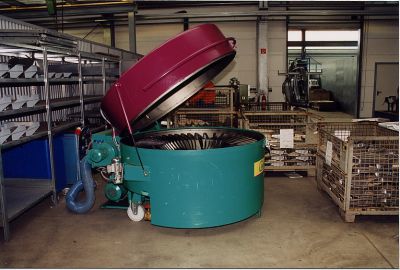 Cleaning machine as moveable top loader. Positioned close to the drawing press for the construction of seat consoles.

The first seat consoles were delivered to Volkswagen at the beginning of April. The remaining 2500 recently left the Salzgitter Automotive Engineering GmbH & Co. KG pressing plant in Osnabrück. Martin Fleege, Prototype Manufacturing Manager stresses, “ We would not have made the deadlines without the cleaning machine. It was a prerequisite in order to keep up with the output from the pressing plant. This prerequisite was even exceeded: In the end the cleaning plant had to wait for the greasy parts.
As production of the consoles for the new VW Transporter T5 began, the 400 mm 3 250 mm sheet metal plates had to be cleaned with a cloth. This was time consuming and meant high personnel requirements, especially when ten employees had to be put on cleaning duty as 100,000 of these parts for Salzgitter Automotive Engineering was a considerable amount.
“We produce sheet metal plates for prototype production and for small-series production” explains Martin Fleege. “ The batch size begins with single parts, which for prototypes would be from around 10 to 150 pieces. For small series the batch size would be up to many thousands of pieces. For this reason, according to the department manager, the cleaning plant must be capable of flexible use. The cleaning plant is in use on a daily basis. 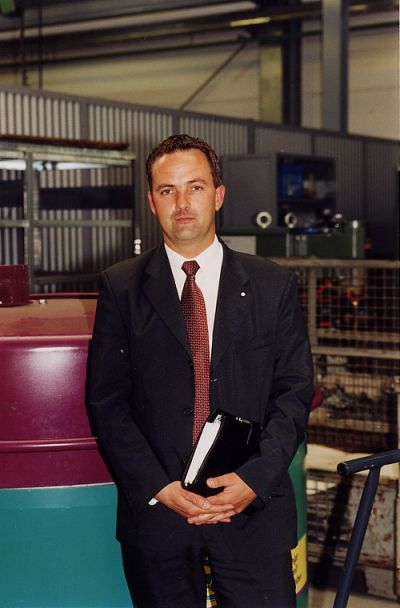 Martin Fleege, Salzgitter Automotive Engineering GmbH & Co. KG, Osnabrück: „without the cleaning machine we would not have made the deadlines:”
The production of seat consoles which require a grease-free surface in further production was crucial to the decision to purchase such a cleaning plant. A previous change to degreasing did not produce the desired effect which was only the achieved with the implementation of automatic part cleaning. The Clean-o-mat SP from the company Perkute Maschinenbau GmbH in Rheine was chosen. It is the largest model of the Clean-o-mat SP range and actually designed for heavy cumbersome parts which often have to be placed in the machine from above by crane or forklift. The top loader, however, had the huge load volume in its favour: 50 consoles could be simultaneously washed and dried stain-free. This took only 6 minutes meaning the plant redeemed its costs through this production run alone. Martin Fleege reports, “an employee needed 3 minutes to clean such a part with a cloth.
The machine uses a spraying method. There are flat jet nozzles installed under, at the sides and above the swivel basket which is positioned on an annulus and driven by an outer electric motor. A 5.5 KW pump supplies the nozzles with a watery, light alkali wash liquid. The frontal volume stream is 450 litres per minute and the spray pressure is 4.5 bar. The wash liquid is heated to its work temperature with a maximum heating performance of 15 KW.


Following washing, the drying process uses hot air which is heated to a temperature of up to 240° C. Condensation is released. The drawing off of vapour is continued at the end with non-heated air, so that the parts may be removed immediately after opening the cover. In cleaning the consoles this was an advantage because the moveable plant stood next to the drawing press and the parts could be cleaned without requiring interim storage. MM
﻿