Courage of the risk: A throughput cleaning machine optimizes the production of lock cylinders 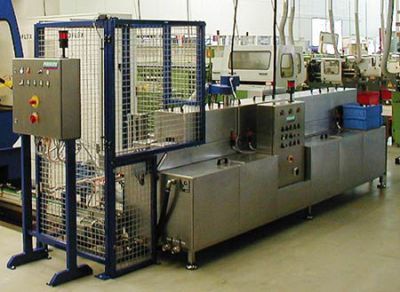 The throughput cleaning machine TW 108 for watery cleaning of lock cylinders
by gun spraying
Production Manager Michael von der Höh of FCV Cylinder, Velbert, Germany shows healthy self-confidence when he emphasises that he mostly relies on unconventional and novel solutions when choosing his production equipment. In doing so he does not lose sight of the risk that the occasional machine may still suffer from teething problems whilst production has to be optimised.

However, the fact that cases like these are kept within a limit whilst most of the prototypes and specially designed machines run smoothly from the beginning speaks for his skills. One example is the new throughput cleaning machine TW 108 by Perkute Maschinenbau, Rheine, Germany.

Karl Fliether GmbH is a leading manufacturer of branded products in the lock industry and has been producing door locks since 1868. Their subsidiary FCV, which was founded in 1956, is responsible for making cylinders and keys. Contrary to the widespread opinion that innovation and product development are hardly possible in the area of security and lock technology, FCV proves the opposite. Together with customers new locking systems which lock doors more comfortably and safely are continuously developed worldwide. This requires modern production equipment which helps to react flexibly to changing requirements. 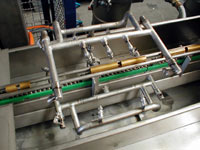 At FCV more than 300,000 lock cylinders are produced, which used to be extensively cleaned in standard cleaning machines several times before shipment. Michael von der Höh wanted to simplify and automate these processes as far as possible. In close co-operation with the people in charge at Perkute, a throughput machine with seven zones was designed, which runs almost without supervision.
The lock cylinders are produced by a special machine in 15-second intervals and then transported to an aligner via a standard conveyor belt. There a pneumatically driven gripper takes them, lifts them up and turns the cylinders through their diagonal axis by 90 degrees in order to place them onto the tappet chain of the throughput machine. A light barrier checks if the cylinders have been correctly positioned. It is not until then that the products pass through the actual cleaning machine. In the first phase of the ''washing zone'' there are four sparger rings with adjustable flat fan nozzles. A stainless steel pump sprays the washing medium mixed with a cleaner out of the tank on one side of the machine onto the cylinders. The machine’s environmental safety was given high priority. The zones are completely isolated and are equipped with coarse filters in the backflow of the tank as well as bag filters with a mesh width of 50 µm to keep back even the smallest swarf.

These filters are designed as switch-over filters, i.e. when it is necessary to exchange a filter, the machine switches over to another filter so that the exchange of filters can be carried out without interrupting the running process. The measuring of the cleaner in the bypass is equally uncomplicated. The system makes sure that a concentration of 0.5 per cent in maintained. To increase the bath durability, the absorbed oils are separated by a plate-phase separator.


The next stations are the neutralising and draining zones, in which fan type nozzles separate the wet particles from the cylinders with the help of side channel blowers in order to avoid delays between the individual zones. At the same time the extraction of expelled moisture is carried out by an additional blower. After that the cylinders are taken to the final rinse zone, which is designed similarly to the washing zone and where the remaining particles are washed off the cylinders. After this process the components are dried in the drying zone. A 6 kW fan heater heats the air to a pre-set 60 degrees Celsius and blows it through two fan type nozzles onto the pieces. The pieces are then brought out of the machine via the fade out zone, which has a length of 500 mm. The interesting point is that the cylinders are lifted by a gripper and turned through their longitudinal axis by 180 degrees, so that they can be stacked on the mounting plate, ready for shipment.

The whole machine can, if necessary, be operated automatically and manually. Because of its compact design it can be very easily integrated in the production line. It is very flexible because it is designed for piece lengths of 36 to 180 mm. It is designed for multiple-shift operation and after the first eight weeks in operation it can be rightly said that its suitability for daily use has been impressively proven.